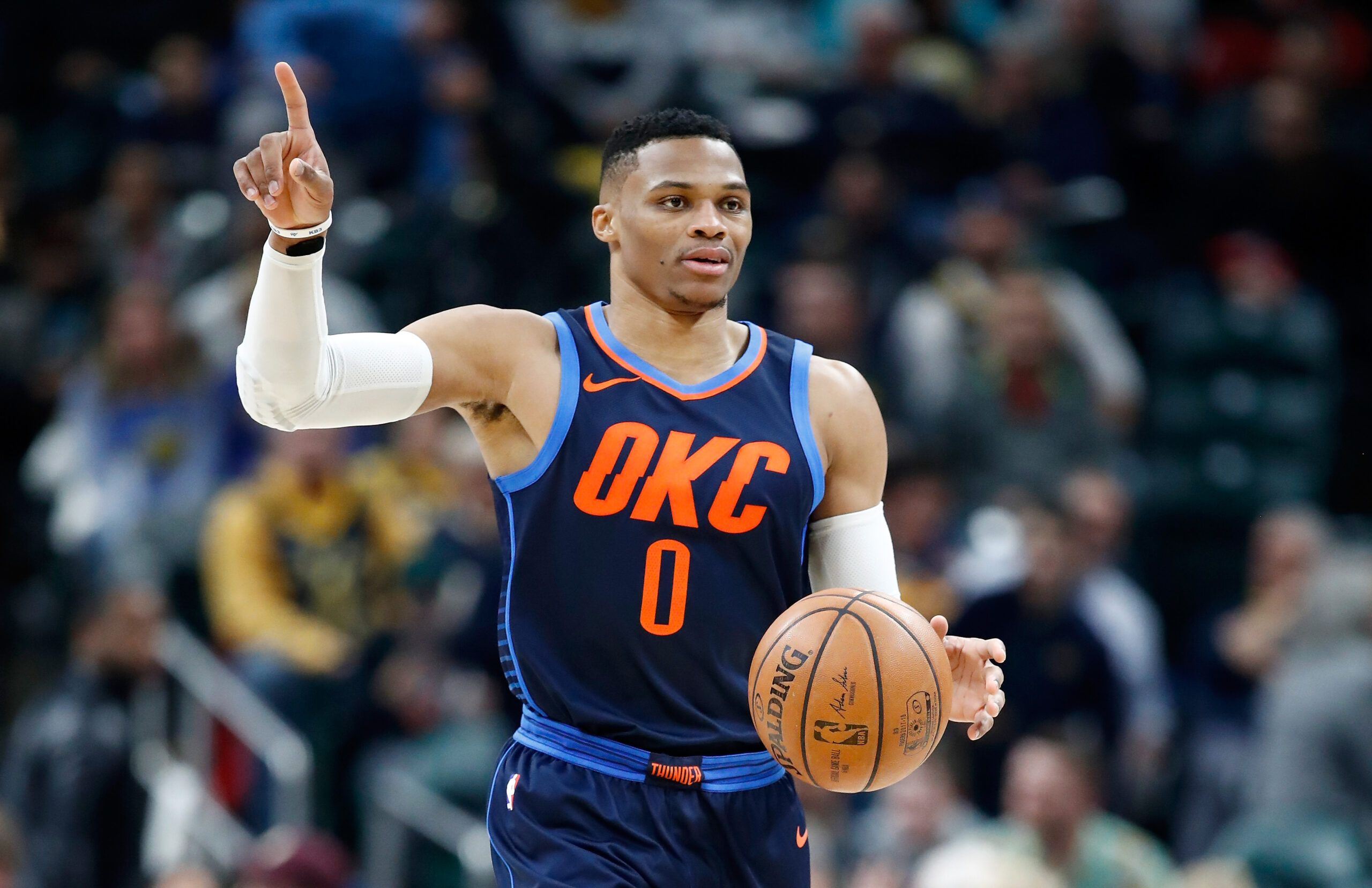 Yes you read that correctly. Russell Westbrook may be the hardest working player in the NBA not named LeBron James. Last week, the Oklahoma City Thunder went into triple overtime against the Philadelphia 76’ers. In the first double and triple extra sessions of the 2017-2018 NBA season, the Thunder came away with the 119-117 victory. The stat line by Russell Westbrook, seems to be a controversial topic of discussion for Russ supporters and of course for routine Russ critics and haters. The loud white noise inspired me to finally write about the heavily criticized reigning MVP.

Russell Westbrook is a versatile workhorse. He finished the game with 27 points, 18 rebounds, 15 assists, and 2 steals but what dominates discussion is his 10-33 shooting, and 6 turnovers. Now it was not an efficient night for Westbrook, as this has not been an efficient year for Russ. He is shooting a career low 39% from the field. It was an unusual efficient night for Carmelo Anthony as he had the hot hand going for 11-16 shooting for 24 points. In a Billy Donovan system or lack of, unfortunately Carmelo Anthony often seems like the odd man out.

The Thunder 3 headed monster features iso heavy players, who’s clearly been struggling with trying to figure out how to play together successfully. As we speak they sit right below .500, with a 14-15 record, which is not hardly reflective of their talent. With a thin bench, the Thunder usually relies on their core three guys to take turns scoring the ball, as they often lack movement off ball and fail to get into any sets until late in the shot clock. If that is a point guard problem or coaching problem depends on who you ask.

Now we may say 33 shots is a lot of shooting, but for some weird reason it was rarely mentioned as “stat padding” or “bad basketball” when The Answer or Black Mamba were the ones hoisting as many shots. In a triple OT, folks claim that Russ shot the ball too much but I know that the same shooting output would be a regular game end of regulation for Kobe or AI, minus the 15 dimes and 18 boards of course. Instead of celebrating a guy that can shoot 33 times and drop 15 assists and grab 18 rebounds in the same guy, we accuse him of being “selfish.” The difference in opinions and the inequitable criticism may be a sign of a difference in era and the fact that basketball is as watered down as Hip Hop these days.

Now days, efficiency is thrown in your face as support for superiority as much as platinum records are thrown in your face to justify an artist being better than another. Gone are the days where you stay loyal and win with pride and present are the days where you join the competition that beat you, just so you can skate to the finals and win. Today, the weak is celebrated and tolerated and the real is criticized and ridiculed. When you do less, you are said to be a “team player.” When you do everything, you are said to be everything negative under the sun, including “selfish” and “hard to play with.”

The fact of the matter is Russell Westbrook sadly may be victim of playing at the wrong time. In an era of weakness, and a kiss and be friends type of league, he may never get the respect that he rightfully deserves. As difficult as it may be to believe, if Iverson was to play in 2017 instead of 2001, I have every reason to trust that he would be overly criticized instead of largely celebrated like he was in his day. Its a new day and now days, being a “team player,” means not being versatile or being the best individual player you can be. Instead its about joining forces and maximizing greatness in fewer things for the sake of hosting the Larry O’Brien trophy up in June, under any means necessary. Not with pride, not with hard work, not with determination but with strategic strategy, three point shooting and player led team assembling.

With all of that being all facts, Russ Westbrook will never make his haters and critics happy. He’s too REAL to be liked by the fake, too versatile to be appreciated by the one dimensional, too fearless to make the fearful comfortable and too brash to cater to the timid. At the end of the day, there are very few basketball players on planet earth that can be productive in more areas than him but there are plenty basketball players that can bring you more efficiency than him.

If you are looking for a guy that will consistently shoot over 45% from the field, Russ isn’t your guy. As a natural two guard, he’s done quite well in scoring and assisting, as he averages 8 assists for a career. Not even Kyrie Irving can say that. As many times as Westbrook shoots, he still manages to dish it off to his teammates for scores, even more so than “traditional,” “pass first point guards.” He’s been top of the league in usage for multiple seasons, which largely corresponds to his high turnover rate. Both James Harden and LeBron James can tell you how usage correlates to turnovers, as they both average four turnovers a game, like Westbrook.

When it comes down to it, Russell Westbrook does struggle with sporadic and flawed decision making but when it comes to basketball, its not much that he cannot do on the basketball court. He is not by any means a perfect basketball player but it does suck to see others celebrated and see him knocked, when in reality he gives you more than the ones being celebrated. AI nor Derrick Rose or Kobe Bryant was giving you 10 rebounds and 10 assists a night. Russ may not be your preference but one thing that cannot be denied is the man’s talent. No he is not overrated and no he is no cancer. He was in the finals as a 23 year old kid and he has the will and determination to get back there. If water is not your thing, there’s always coffee or tea available but always remember water does and will always do more for you by itself.

If you can’t respect that, you’re whole perspective is wack

Maybe you love Russ when he fades to Black