Kevin Durant Reveals Why He Left The OKC Thunder 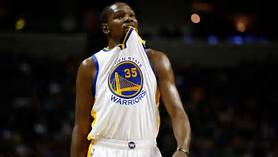 As people say, “what’s done in the dark will always come into the light.” Kevin Durant’s secret on why he left the Thunder finally has been revealed. Durant has was he claims are “burner accounts” on Twitter that he uses when he wants to defend himself. Unfortunately, on this day he forgot to switch to one of them and instead was replying from his verified account. His reasons were firm and made sense but let’s be honest, he didn’t want people to know that’s how he truly felt. Shedding light as to why he really left KD had this to say,

“He didn’t like the organization or playing for Billy Donovan. His roster wasn’t that good, it was just him and russ.” ~Kevin Durant

“Imagine taking russ off that team, see how bad they were,” he added. “KD can’t win a championship with those cats.”

Up until now, people were speculating about why KD left but now we have answers straight from the direct source. Durant now joins the likes of LeBron James, as players that quickly turned into overnight villians for their decisions to abandon their teams in free agency by joining other stars.

KD said he was “disappointed in himself” but former Thunder teammate, Enes Kanter was not trying to hear such sideway talk from Durant. The two are notably former friends and Kanter had some things to say about KD on his Twitter account

“I don’t care what anyone says. Oklahoma City Thunder is the best and most professional organization in the NBA and got the craziest fans.” ~ Enes Kanter before okc trade

It is clear that Durant’s friends on the Thunder have heard enough and the games that the Golden State Warriors and Oklahoma City Thunder play with against each other will be as intense as they were in the past season. If Durant wasn’t a fan favorite in OKC before then, he may be even more hated following his comments.

Aside, from knocking the Thunder he also shed light in interview as to how he initially regretted his selection of Golden State.

If you would like to know how I feel about this I leave you with this. Russell Westbrook signed a $205 million extension with the Thunder on September 29th the same day as Kevin Durant’s birthday. One might call that simple coincidence while others may call it intentional pettiness but is leaving the team that took a chance on you by drafting you petty? Or is leaving that team for the team that just ended your finals chances even more petty and weak?

If the Thunder was a bad as Durant was describing them then they likely would not have been up 3-1 against the most winningest team in NBA history.

As was said before, “what is done in the dark will always come into the light.” Durant proved with his comments that he always had a little boat on the side just in case things got tough so he can jump ship.