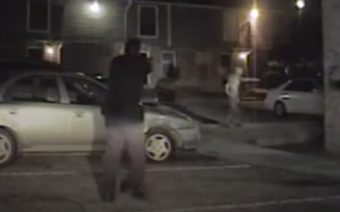 Newly released video footage of a July police-involved shooting that left a man paralyzed contradicts officersâ€™ claims that he threatened them with a weapon, the manâ€™s lawyer said.

The Huffington Post reports that dash-cam footage shows a Fort Worth officer shoot David Collie just seconds after the law enforcement officials emerges from his car. At the same time, a Tarrant County sheriffâ€™s deputy can be seen pointing a flashlight at Collie.

Nate Washington, Collieâ€™s attorney, released the video earlier this week. His 33-year-old client is now paralyzed from the waist down.
The officer fired at Collie twice. One of the bullets struck him in the lower torso, Fort Worth Police Department officials said.
The department said the two officers â€œwere working together in an off-duty capacityâ€ as security guards at the apartment complex where they encountered Collie.

The police were responding to reports that two shirtless Black men had robbed a gas station. They reportedly became suspicious of Collie because he matched the general description.

But Washington said his client was just walking to a friendâ€™s home. The officers allege that Collie initially ducked down behind a bush when they appeared and attempted to flee while ignoring commands to stop and remove his hands from his pocket.

They also claim Collie menaced the officers with a shiny silver object, believed to be a firearm, before being fired at.

A box cutter was retrieved from the scene, but no gun. Washington said the box cutter was not Collieâ€™s. He also argues that the video footage shows that Collie never threatened the officers and had actually complied with orders to lift his arms.

Fort Worth police Sgt. Marc Povero saidÂ that department officials reviewed the footage â€œimmediately after the incidentâ€ and determined that the officersâ€™ description of what transpired matched the video.

A department review of the shooting is complete but its findings are private. The Fort Worth officer has returned to duty.

Collie was hospitalized for two months. He was initially charged with aggravated assault on a public servant. The case has since been thrown out.

Watch the disturbing footage below.