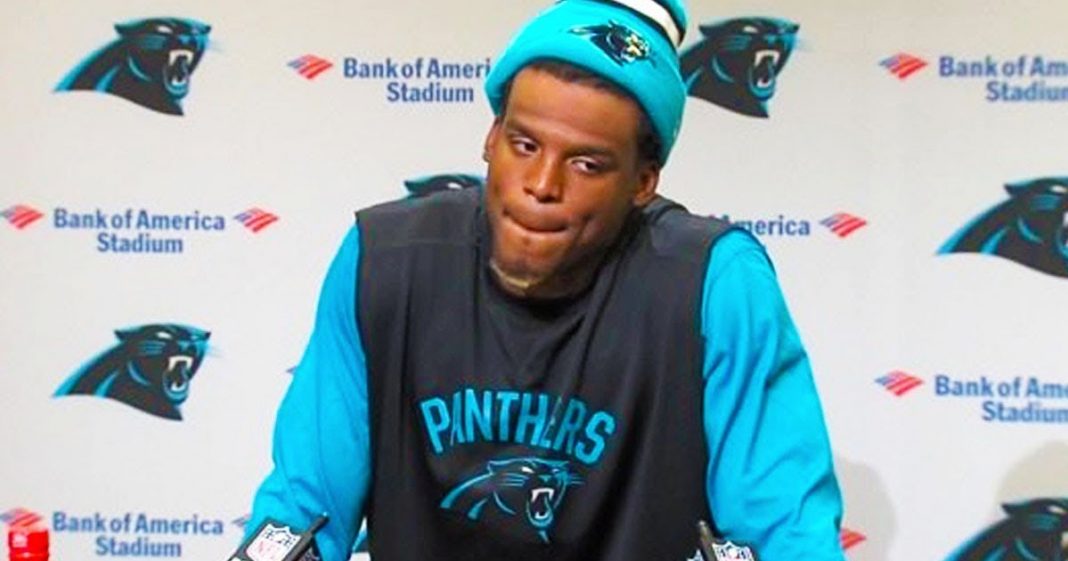 With that being said, I would like to note that it is 2017 and I can speak for myself. First let me start by saying that I did not find Cam Newton’s comments to be offensive or sexist. In fact, I find the uproar by women in sports to be counterproductive, as it makes us all appear overly sensitive and defensive over something so trivial. After two days of watching a complete wreck take place regarding Cam Newton’s “sexist” remarks, I have decided to type words to something other than social media. The backlash that Newton has received for suggesting that it is “Funny hearing women talk routes” (football) has gone way beyond sensibility, so much to the point where it has become angering and annoying.

As a woman who has formerly written for Dime Magazine, Cavs Nation, worked at CBS Sports, CBS Sportsnetwork, and has chased positions in NBA front offices and press rooms, I can honestly say that I know a thing or two about sexism in sports. Additionally, as a woman who has experienced sexism up close and personal, I can tell you that Newton’s comments do not even scratch the service of Real sexism.

Let’s break this down. Jourdan Rodrigue, has served as the Panthers Beat Reporter since the 2016 NFL season for the Charlotte Observer. She happened to ask Newton a question about the physicality that his receivers ran their routes with and if it brought him “enjoyment?” Personally, I thought it was a pretty silly question myself but if I call it that, I may too be labeled a “sexist.” Is that even possible being that I too am a woman? Who knows these days? I mean, I did just find out that I should not be called a “female,” because it fails to acknowledge my humanity as a woman. Yea, alright. Anyway. So Cam who was OBVIOUSLY caught off guard talking routes with a woman,  goes on to make his “sexist” comment and proceeded to answer Jourdan’s question.

He did NOT dismiss her because she was woman. He did NOT make a sexually charged comment because she was a woman. He did NOT ignore her question. Instead, he answered her question like he did every other reporter in the room. Now did he acknowledge that she was a woman? Well sure. I mean, as the token Black in many rooms, I think its kind of difficult not to be noticed as such in a room dominated by whites. Similarly, it is unrealistic not to stand out as a woman in a room heavily dominated by males. Oh wait! Please excuse my lack of political correctness. I meant to say men. If anything, you can tell from his expressions that he was more so surprised and likely impressed with Rodrigue’s knowledge of routes but instead people decided to act as if they knew that he intended disrespect and disregard because of her gender.

Who knew that finding something funny because it is abnormal to you as a male athlete was such a crime? I mean you would have thought the guy said that he wanted to grab Jourdan “by the p$%^&” but instead Cam did not nor is Cam running for President of the United States of America. From his demeanor, you can make assumptions as to what Newton’s intent and mindset was behind his “funny” comment. From my interpretation he was not saying it was funny that Rodrigue was questioning him about routes because he assumed that she lacked ability to understand because of her being woman. Instead, it seemed that it was nothing more than him not being used to talking routes with women which is REAL.

If YOU, every other man, and television network REALLY cared about sexism in sports than you would exert such backlash and energy into dismantling a structure that supports such set up.

Let me give you some facts

As of 2014, 90% of editorial roles and assistant editorial roles are occupied by men. Eighty eight percent of sports columnists, 87% of Sports Reporters and 95% of Sports Anchors are men, while only two women were hosts. Meanwhile, huge networks like Fox Sports and ESPN, reinforce stereotypes as they all follow the exact format. On ESPN’s First Take, past “host,” Cari Champion and current host, Molly Qerim do nothing more but sit in the middle as pretty woman faces, to MODERATE between two men as they go head to head expressing their opinions for sports topics. Suggesting that because, they are women, they lack any valuable contributions and opinions to offer to the debate. Talk about sexist? FS1 follows this same format, as viewers fail to see Moderator, Joy Taylor mentioned anywhere on the very popular, Skip and Shannon: Undisputed. She too sits there to be cute and keep men on topic. If that is not enough, then look at how sideline women reporters are used as nothing more but young, usually blonde, made-up faces with a sole purpose to stand there and look cute, while reporting or interviewing male athletes. Talk about sexism and objectification there if you care so much.

How about the REAL sexism and issues?

In coaching and front office positions the stats are even more staggering. Don’t be fooled when you hear that 30% of front office positions belong to women. Administrative positions account for many of those occupied roles while reality becomes more clear in actually Football Operations, coaching, scouting and officiating. Sarah Thomas just became the first full time woman referee to be hired by the league in 2016. Just three years ago the NBA’s, San Antonio Spurs made former WNBA star, Becky Hammond the first full time Assistant Coach. Women scouting men sports? Forget about it.

What is this about?

So what is this “sexism” talk really about? Is it about Cam Newton? The kid who dabbed all season long two years ago? The kid who walked off the podium after being questioned? The kid with the talented arm and speed at Quarterback, who’s confidence and unapologetic behavior makes many uncomfortable and is mislabeled as “arrogance?” Well if he’s “arrogant,” a “show boat”, a “bad leader,” I guess now you can add “sexist,” to the long list of negatives things Cam Newton.

Look Cam Newton is not perfect to me, to be honest I didn’t care for his Kaepernick comments and his stance on race in America. But I do not think the man had any sexist intent with his comments regarding Jourdan and women. Was it a smart comment? Cleary not, considering how he’s been dropped by Dannon, as an endorser and how his character and name has been dragged thru the mud for the past few days. I’ve even heard the man’s apology criticized and questioned for sincerity because it took him nine hours to issue it, and he failed to name Jourdan. As if an alleged “sexist” is a bad guy for not acknowledging a clear “racist.” In my humble opinion, I saw no need for Newton to apologize outside of him needing to conduct some damage control because of how far people took it.

Is this a false start on pulling the race card? No its not. This outrage would not have spiraled out of control if this was known rapist, Ben Roethlisberger or known cheater, Tom Brady that made these comments. If you say it would have, then you my friend are in denial and do not live in reality. If you think race played no role, pull up Jourdan’s tweets from a few years back, and look how differently black athletes are crucified for mistakes as compared to their white counterparts. Black athletes continue to be vilified and mortified from everything including from weed smoking, dog fighting, domestic abuse to the most trivial of things as seen with calling something funny. Now are any of those things I’ve listed right and am I suggesting that they do not deserve consequences because they are Black? No, that is not what I am saying, but what I am saying is that the disparity in consequences is well beyond played out, blatant and obvious. In fact if Cam said his same comments to a Josina Anderson, Pam Oliver or any black woman reporter, I would bet you a thousand dollars that we would not be having this conversation at all. #REAL

So whats the point?

Condemning Cam won’t put more women in the front office, in those press rooms or in all these sectors where sexism is encouraged and tolerated on the daily. Perhaps we should stop using Cam as a scapegoat and get down to the Nitty Gritty of what’s really wrong. Thats if you truly care and if you’re just not faking like everyone else. If we use this same energy directed at Cam to truly dismantle sexism in sports then maybe Newton and so many other men won’t find it “funny” to hear women talk about football routes anymore.

Whats are your thoughts? Tweet us @theblack_juice or Tay directly at @bucketsandmusic