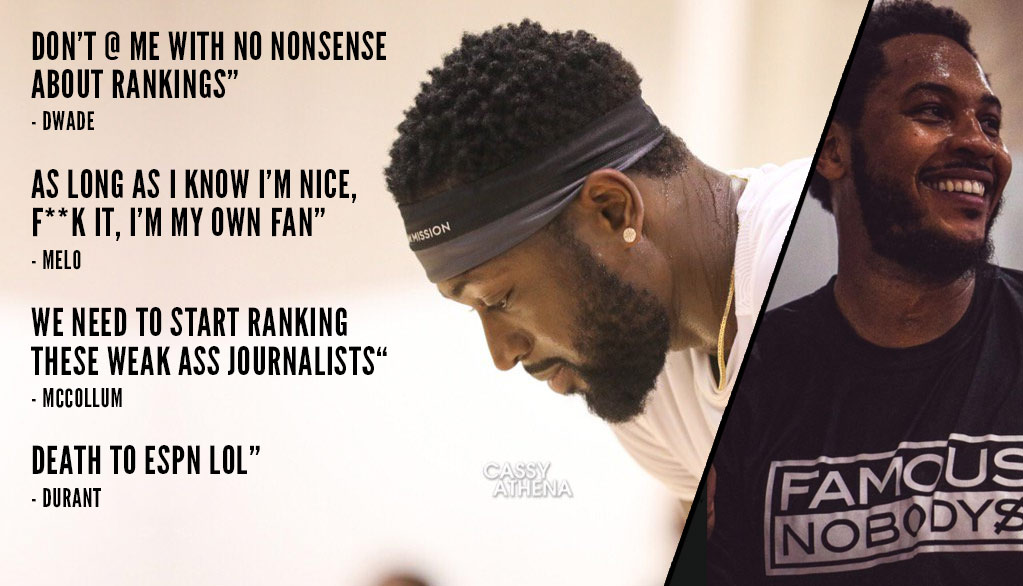 ESPN and The Crossover by Sports Illustrated released their top players in the NBA for the 2017-18 season. A lot of people were questioning the decisions made by both of these well respected media outlets so here is my take on both of these lists.

It was hard to see what these lists were based on. If they were based on the true top players in the NBA then these two lists would not be accurate. On SI there were some eye raising rankings. Kyle Lowry and Mike Conley were both ranked ahead of Kyrie Irving. Irving not only had a longer season than either of the two, he had more points per game than either player with his 25.2. Conley had 20.5 and Lowry had 22.4. Also Kyrie Irving was not even ranked in the top 20.

Carmelo Anthony was at least ranked 37 at SI but on ESPN’s list, which was even more questionable, had Lonzo Ball ranked one spot ahead of Carmelo Anthony at #64. Ball is a rookie and hasn’t played one game yet. Carmelo has averaged 20 points or more for his career for 14 straight years and will join Kareem Abdul-Jabbar and Magic Johnson if he is able to do it this year again, which will bring him to 15 years averaging 20 points or more. Carmelo is a scoring champ, a six time All-NBA player, and a 10 time All Star and Lonzo Ball is ahead of him.

To make matters worse about SI’s list, they had Melo and Demar Derozan behind Khris Middleton. Both Anthony and Derozan have led their teams in playoff games and have multiple seasons of averaging 20 or more. Middleton has none and no All Star appearances at all. Both Derozan and Anthony have 13 All Star appearances combined. Derozan made the All NBA team last year and he has still not earned the respect he deserves given from what he ranked on the list.

Joel Embiid was ranked at 41 on SI and ESPN questionably ranked Embiid at 32 which was one spot before Isaiah Thomas. ESPN said the guidelines were the quality and quantity of a player’s contributions. If that is the case then Embiid who has played 31 games in three seasons should not be considered 32 overall on your list. Especially one spot ahead of a player that had “one of the best offensive seasons in Celtic history.”

The two lists were questionable to say the least but it will be interesting to see if the players that got blessed with high rankings will be able to back up such ranking with their play this season.