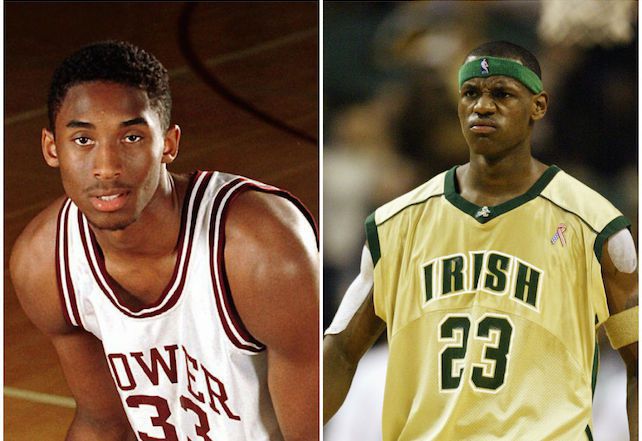 In 2006 the NBA started a rule that stated that players had to be 19 years old or older to be able to be eligible to enter the NBA draft.

This had a domino effect on the college game as it meant more players would be attending school to play basketball for one year and then exiting school early for the draft.

The rule was not received well by many players because it delayed them considerably increasing their finances for at least 1 year. It did not help the players that needed money to help their families and forced those players to resort to plan B.

Universities do not pay their student athletes, that is well known and that is another controversy that goes hand in hand with the one and done rule.

Almost 75% of the NBA is black and most of them come from urban backgrounds. They just do not come from money so when they have an opportunity to change their surroundings they will take it.

This rule hurts those players more than anybody because they need the money more than anybody else. Players like LeBron James, Kevin Garnett, Kobe Bryant, Tracy McGrady and Dwight Howard are some notable names that skipped college and went directly to the NBA but those guys are the special cases. For others, guys like Kwame Brown, Desagna Diop, Jonathan Bender, Sebastain Telfair, Eddy Curry, and Ndubi Ebi proved to not be so special. Then you have guys like CJ Miles, Darius Miles and Shaun Livingston who never managed to become all stars but still enjoyed serviceable careers.

Though many oppose the age requirement rule in the NBA, What the league was trying to prevent was a lack of development and maturity issue. Yes most kids are able to decide what they want to do what their lives at age 18, the NBA is a private league and in efforts to safeguard a quality and developed product the NBA exercised its right to increase the age limit. Guys like Carmelo Anthony, Kyrie Irving and Kevin Durant are all examples of guys improving their games on the college level for one year and becoming stars once entering the NBA.

Though the Kobes, KGs, and LeBrons are amazing, they are not likely to be every players fate, with or without college. One notable player that the NBA can turn to as an epic fail for a kid directly from high school is Kwame Brown. He was the first high school player that was taken number one overall in NBA history, and the pressures of being the number 1 pick was evident before Brown fell flat on his face with expectations. He played in 607 games and ended up averaging 6.6 points with 5.5 rebounds for his short career.

After being selected by Michael Jordan in the 2001 draft he did not come close to living up to expectations but just two years later an anomaly by the name of LeBron James entered the league with even higher expectations. At age 18, fresh from high school graduation LeBron inked a 100 million dollar endorsement deal with NIKE, and entered the NBA draft with expectations through the roof. Fourteen years later he is now a 3 time NBA Champion, 4 time MVP and 13 year all star.

The league has seen three players straight out of high school go number one overall in the draft and to many peoples surprise, two out of the three went on to become all stars in LeBron James and Dwight Howard. Not bad, if we are talking percentages.

The draft is a crap shoot and you just never know what you are going to get but drafting at age 19 or older can has its positives for both the NBA, players and college. For NBA personnel, they get an opportunity to analyze kids against better competition. For players, they get to further develop their games before going pro and the colleges get to make money off players they ordinarily would miss out on to the league. A perfect example is Ben Simmons at LSU, and the numerous players that’s gone one and done at Kentucky and now Duke just to name a few. Kids, are also now getting a bit creative as to how they spend that year between age 18 and 19, as guys like Brandon Jennings and Emmanuel Mudiay has opted to play oversees instead of college. In that regard, I guess some money is better than no money.

With the age requirement you would think that would keep NBA scouts and blood thirsty runners and agents out of high school gyms, but unfortunately they still come or hound players on the poorly regulated AAU circuit instead.

The bright lights of the NBA can be astounding and kids making a pit stop in college, can go a long way for all parties with interest. The protection that players usually receive in college is what the NBA wants the player to have. Before signing to an agent, dealing with a demanding NBA schedule and the criticisms of the media or the off court realities that comes with the lifestyle, college can go a long way.

That was one perspective but on the opposite end of the coin you have folks that says the above rationale does not make sense.

A person will say what about the NFL’s rule that you have to be three years removed from high school before they go into the draft?

The nature of the NFL is different because of the fact that it is a true contact sport and it is a must that a player gets the seasoning and gets his body ready for the NFL.

Basketball is a sport that doesn’t matter if your body is the biggest or the most ready.People said that Kevin Durant had to bulk up and he proved them wrong. Also players not banging bodies and are not getting slammed to the ground on every play.

These days everything is not a foul in the NBA and they have taken every step to make sure that the game is safe. If the NBA expects that every player will come out and be like LeBron, an association changing player, then they are sadly mistaken. There are a lot of players that came out of high school and are contributing well to the NBA.

Players like Lou Williams, Shaun Livingston, and Al Jefferson all came out of high school and have earned a lot of respect in the league.

Williams is looking like the NBA’s sixth man of the year and Shaun Livingston has revitalized his career in Golden State being a back up point guard for a team that has made the finals the last two years.

There are college players that excelled in college that did not make it in the NBA like Adam Moorison, Emeka Okafor, and Hasheem Thabeet.

Thabeet was going to be the next defensive superstar in the NBA and his run at UCONN in college helped him earn his way to the number two overall pick in the 2009 draft after Blake Griffin but he only ended his career with 1.8 defensive rebounds and .8 blocks. He only lasted four years in the NBA and played on five different teams.

Another player that came out of college after the rule that was supposed to be great was Greg Oden who was the number one overall pick in the 2007 draft. Unfortunately his knees let him down and he is no longer in the league.

With that being said, there is no excuse for the NBA to have this rule in place. What is really going on is the fact that the NBA doesn’t want anything to do with the neighborhoods that they would be recruiting in.

They want to avoid the “ghetto” and they want to deurbanize the NBA by cleaning up its image. The past few years you can see how the league has changed drastically, just look at the dress code. Gone are the days of embracing an Allen Iverson because guys like him are just not in the league anymore.

At the age of 18 a player is old enough to make that decision to play in the NBA and the NBA needs to change the rule as soon as possible or they risk being looked at as a league that doesn’t support the young black urban community.

Do you agree with the age 19 or older requirement in the NBA?