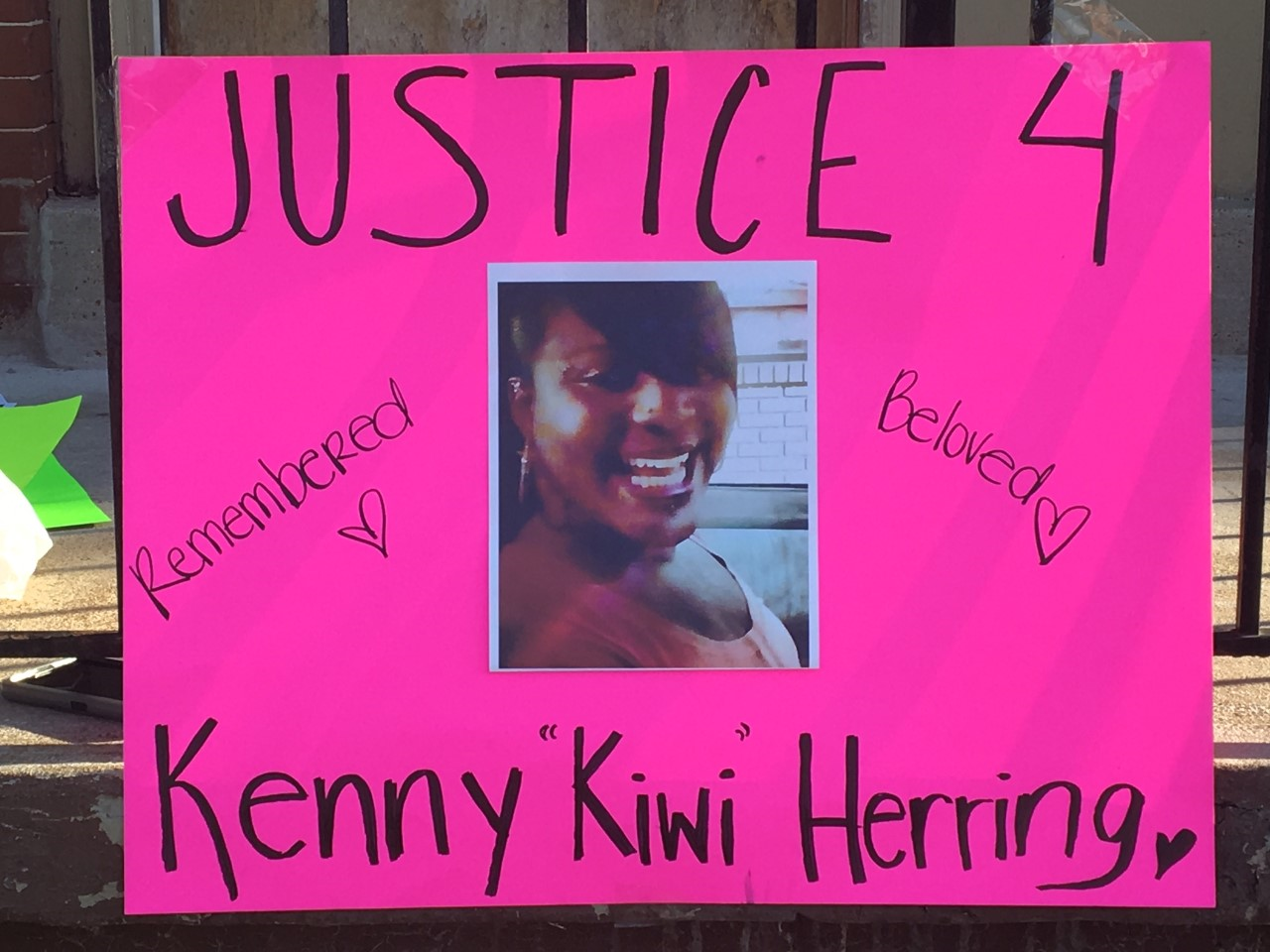 On Tuesday, August 22nd, Kiwi Herring, a 30 year old wife and mother of three young boys, was shot and killed by police. Herring, a Black transwoman, was partnered to Kristy Thompson, a black transman. For months, the couple complained of violent threats and transphobic harassment from their community with the worst of it coming from their downstairs neighbor. Kiwi’s death appeared to be the culmination of these tensions.

According to witnesses, Monday night, Herring and Thompson’s back porch was set on fire. Verbal harassment from the neighbor and other community members continued early Tuesday morning, which led to an altercation. According to St. Louis Police Chief Larry O’Toole, police arrived to find the downstairs neighbor wounded with lacerations on his torso, face and arms. The neighbor called the police and identified Herring as his attacker. When officers responded, both Herring and Thompson were together in their home. It is unclear the sequence of events between the officers’ arrival and their presence in the house, but it is reported that Herring slashed a kitchen knife at both of them. She sliced one officer on the arm, from there which both cops fired their service weapons. Witnesses report hearing seven total shots. Herring was pronounced dead at the scene.

The injured cop was treated at a local hospital and released shortly after admission. Both officers were placed on administrative leave. Thompson was taken into custody after the shooting and charged with first degree assault with a deadly weapon. No reports state the current condition of the neighbor.

Tuesday night, dozens of relatives and friends gathered outside of Herring’s apartment for a candlelight vigil. Afterwards, about fifty people gathered in protest to bring awareness to Kiwi’s death and shine light on police brutality towards LGBTQIA people of color. Between songs, speeches, and prayers, they chanted, “Stand Up, Fight Back.” A car drove through the crowd hitting and injuring several demonstrators.

This is a complex case for society and civil rights organizations to digest, which may or may not be the reason this story didn’t spark national attention. In addition to Monday and Tuesday’s events, it is reported that police had been previously called to the residence for multiple domestic disturbances. Kiwi and her partner were individuals at the extreme intersections of marginalization – Black, queer, transgender, low-income, and previously involved with the law in domestic disputes. While many have come forward to express skepticism of police accounts, others are less suspicious but believe that officers may have acted impulsively in a situation they could have deescalated without the use of deadly force. Nonetheless,  mourners on either side of debate recognize this life lost as a tragedy and maintain solidarity with the ailing transgender community.

This case is polarizing and not one party is explicitly at fault. It is possible to view this story through sympathetic and humane lenses while still acknowledging that all parties could have behaved differently, or involved the law before this dispute reached a fatal climax. Unlike previous viral cases of police brutality, this isn’t a situation where victims were murdered while completely unarmed. There isn’t video evidence of police malpractice such as planting weapons or illegal substances, nor is there footage of the dispute showcasing one party practicing unwarranted aggression but claiming victimhood when violently confronted for their bigotry.

But, it is because of this polarity that this case deserves national attention. Humans have layers, but the law and public discourse have fractions. In the same way that we as Black people firmly comprehend the underlying oppression that leads to wrongful and disproportionate criminalization for Black men and Black women, we must also consider how this same system negatively affects people at intersections greater than race and gender. Victims of anti-transgender violence are overwhelmingly transgender women of color. The National Coalition of Anti-Violence Programs reports a multi-year trend showing that transgender women experience a greater risk of death by hate violence than any other group.

The year 2016 overtook 2015 as the deadliest year on record for transgender people in the United States. In 2016, 27 transgender people were killed in the United States and nearly all of the victims were transgender women of color. Herring is the 18th transgender person to be murdered this year. On Monday, September 4th, Kashmire Redd became the 19th. Although we do not know all of the details of Kiwi’s case, here are several proven realities about what it means to exist at the intersection of transphobia, racism, sexism and criminalization for Black transwomen.

One, cops are humans; flawed with biases, prejudices, and fears, yet simultaneously equipped with weapons, policy, and power. Studies show that law enforcement is disproportionately forceful towards all African Americans and that Black women are routinely humiliated by cops from ages as young as five. Additionally, transgender people suffer higher instances of victimization, profiling, entrapment, discrimination and harassment. These cases are often severely underreported in the media and usually do not go to trial because Black women, Black transmen and Black transwomen don’t have the benefits of patriarchy or white supremacy.

Law enforcement exists as part of a system that historically convicts Black skin, animalizes Black men and sexualizes Black women.Therefore, it is not unreasonable to suspect that people at the crux of this intersection would be vulnerable to the worst forms of abuse. So, upon confrontation with police, warranted or other, Black transwoman, like most Black people, are guilty until proven innocent.

Two, the intersection of transphobia, racism, sexism, and criminalization often leads to high rates of poverty, unemployment, and homelessness. There are disadvantaging strikes that completely strip any individual of stability and adequate legal protection. This combination then leads to high rates of homicide and suicide, with low rates of justice. Ivana Black explains that a person is most vulnerable in the space between conceptualizing their trans identity and reaching a state of passability in their true gender expression because this is the space where the world is unsure how to receive individuals existing as “other.” This transition takes years and thousands of dollars. It is the space where the highest instances of violence, discrimination, and susceptibility to mental illness occur.

Three, masculinity and masculine sexuality are fragile. We live in a patriarchal society where men feel entitled to femininity and female sexual expression. Men have murdered women for rejecting their advances, laughing at them, and cheating on them. Men have raped women and blamed her for their sexual misconduct because of her outfit, her alcohol consumption, her friends, her previous sexual history, or simply her choice to be out alone and therefore vulnerable to male entitlement. 80% of incarcerated women exist within a paradigm where they endured physical and/or sexual violence and retaliated fatally. 60% of Black girls will experience sexual violence before the age of 18.

Lastly, Black mainstream transgenderism exists in a way that primarily showcases the otherness of transidentity without simultaneously normalizing transidentity. For example, daytime talkshows have misrepresented transgenderism for 25+ years. Jerry Springer, and other platforms like his, have grossed millions from transwomen revealing “their secret” only to be confronted with verbal or physical assault and an audience that mocks and encourages the battery. There are Instagram celebrities that present this astounding aesthetic transition, but the narrative just becomes reduced to awe that “she used to be man.” Finally, there are activists and performers like Janet Mock , Laverne Cox, and Amiyah Scott that are making tremendous strides for trans women of color by raising awareness through their visibility. Despite their brilliance, they seem to be amplified primarily because they are passing transwomen- not because they are talented, intelligent women contributing in a space, while simultaneously just so happening to be of trans experience.

On the micro level, the Black community has a history of demonizing and shaming all queer individuals because it has been interpreted that our religious leaders and our Gods have told us to do so. Therefore, trans representation is virtually hidden in Black daily life, which ultimately manifests in civil rights regulations that protect Black heterosexuals but explicitly leave behind Black LGBTQIA individuals.

These realities should bring new perspective to Kiwi’s story.

In conclusion, for those of us that believe all Black lives matter, we have a social responsibility and a political responsibility to the LGBTQIA individuals in our community. One, we have to raise awareness by reporting these stories and using the gender expression, name and pronoun of the victim. Two, we have to be political allies. This case is coming on the heels of the transgender military ban; an executive order that expels transgender people from the military, bars the Pentagon from recruiting transgender troops, and cuts off payment for sexual reassignment surgery and other medical treatments for those already serving. The same way we march and call congress when the rights of Black men are threatened, we must also march and call congress when the rights of any Black person come under attack.