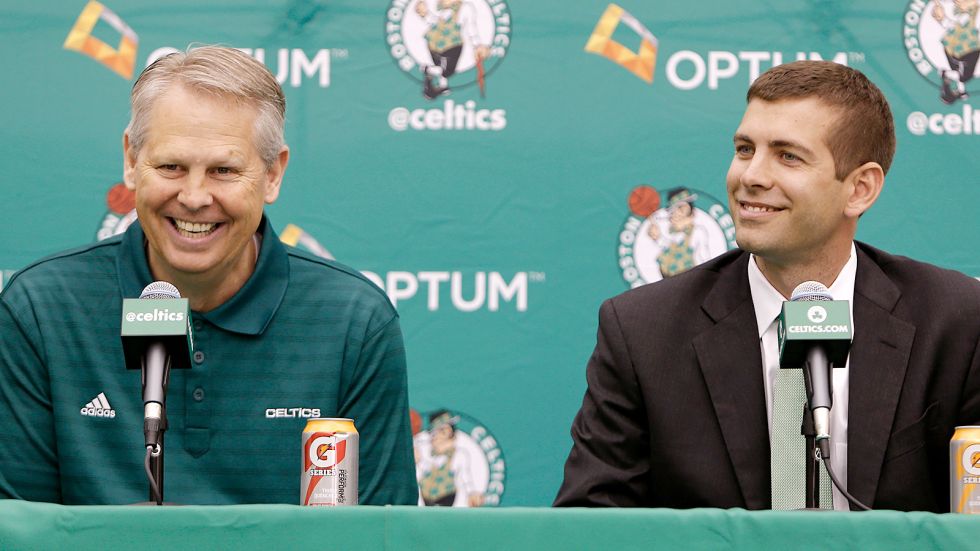 Kyrie Irving is a Boston Celtic.

Do I really need to go over Danny Ainge’s track record of fleecing the competition? Look no further than him pulling the wool over the Timberwolves eyes by flipping AL Jefferson for Kevin Garnett. If that wasn’t enough how about shedding Wally Szczerbiak, Delonte West and the draft rights to Jeff Green in exchange of Ray Allen and Glen “Big Baby” Davis? It gets even sweeter. How about running the course with his assembled “Big 3” and dumping the remaining two off for youth? The dumping of the washed up veterans, in Paul Pierce and Kevin Garnett is essentially what helped Ainge land, Jaylen Brown, Jayson Tutum and now Kyrie Irving via in large part to the picks received from Brooklyn. In typical chess not checkers fashion, Ainge flipped Marcus Thorton and Tayshaun Prince for Isiaiah Thomas in 2015 and overachieved with him until it was nearing the time that he would be faced with paying the 5’7 guard max money. Now that dilemma is all conference nemesis, Cleveland’s problem.

After Landing Irving, Danny Ainge had this to say,

“He has proven that on the biggest stage, the NBA Finals, the last three years. He’s been an NBA champion, an Olympic gold medalist, and a four-time All-Star. For all he’s accomplished, we think his best years are ahead of him.”~ Danny Ainge, GM

At just age 25, its difficult to argue Ainge on that. As for all the coveted assets that Danny was unwilling to part with he finally did so on a player that he deemed worth it to do so for. He declined to send Boston’s draft picks to Indiana for Paul George, or to Chicago for Jimmy Butler. Instead, he sent the remaining pick to Cleveland for their stud point guard and was able to hang on to the top picks he selected in the 2 previous years draft.

“It is a high price tag. But acquiring a 25-year-old perennial All-Star, a player that fits a timeline for us and is a fantastic offensive player, one of the best offensive players in the league, you have to pay a heavy price.”~ Danny Ainge, gm

With this Irving trade, Boston gets one of the most prolific offensive threats in the entire NBA. Some would argue that they already had that in IT, but any person with logical basketball sense will tell you that IT is no Kyrie. Kyrie is the perfect piece to bring in, as he fits Boston’s youthful core a bit better than what IT did. Unfortunately, Boston had likely hit their ceiling with IT and ran the risk of losing him to a max contract in the off season for nothing. Instead they were able to get younger and maybe even better with Kyrie. He brings championship pedigree and can lead the charge in getting Boston over the LeBron hump if he remains out East.

“I think that contracts do play a part in trades, No question about it.”~ Danny Ainge

He got what he wanted. Boston wasn’t necessarily on his “wish list” but it actually suits him well on paper. Kyrie enters a stable organization with a strong front office, a winning culture and a roster ready to compete on a high level. Irving has been heavily criticized for his lack of success playing without LeBron but with his new Boston team, he has pieces around him that has potential to exemplify his game as a point guard and playmaker. Kyrie wanted to be a focal point and he will be that in Boston. No more living in the shadows of LeBron James, Uncle Drew can now be Batman. Gordon Hayward can run Robin and Irving has young talents in Smart, Tatum and Brown that he can lead and mold. If he grows into a distributor, he could even drop off to Al Horford down below.

If Kyrie wanted out, the Boston Celtics was not a bad place for him to personally end up. In a lackluster Eastern conference, the Celtics can go as far as Irving takes them. Coming off an Eastern Conference Final match up against Irving’s former team, they are in win NOW mode. As long as Kyrie’s former teammate, LeBron James is playing out East, all roads to the finals will more than likely have to go through him.

If you can’t wait to see how this all pans out luckily, you do not have to wait too long, as the Cavs and Celtics open the season in Cleveland against each other on October 17th. This should be one entertaining and emotion filled regular season.