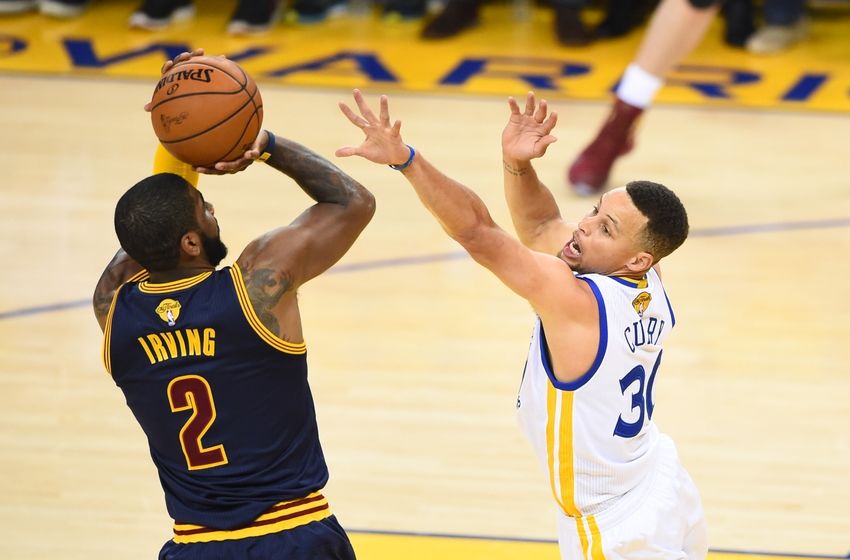 The anticipation and wait has finally come to a close in the Kyrie Irving suspense in Cleveland. Following three straight trips to the NBA Finals, Irving reportedly asked Cavs management for a trade away from the team, for what was said to be reasonings of a desire to become more of a “focal point” for a team. He supposedly had a wish list that included the San Antonio Spurs, New York Knicks, Minnesota Timberwolves and Miami Heat but on Tuesday evening, August 22nd he was dealt to the Boston Celtics.

The trade comes as a surprise to many as the conference rival, Boston Celtics had not been named as potential trade partner up until early Tuesday afternoon. Cleveland had allegedly fielded offers from the Knicks, Heat, Suns and drawn interest from the Toronto Raptors but in the end they found themselves unable to get a deal with those teams that they liked. Cleveland pushed Phoenix to part with standout guard, Devin Booker and rookie, Josh Jackson but the Suns did not budge.

That’s the only way to be to the kid! Special talent/guy! Nothing but respect and what a ride it was our 3 years together Young Gode #Filayy https://t.co/wKYmYsmdgG

Cavaliers new General Manager, Koby Altman has come into the job with big shoes to fill, following the departure of much accomplished General Manger, David Griffin. Altman has has officially been in the position for only a month and he’s already signed Derrick Rose on a veteran minimum deal, brought in Jeff Green and now has traded away, the team’s All Star guard in, Kyrie Irving.

In the deal, the Celtics receive a bonafide star with championship pedigree in Kyrie Irving and the Cleveland Cavaliers, compensate with a fellow star Point Guard in Isaiah Thomas, perimeter defender in Jae Crowder, Center, Ante Zizic and the Celtics 2018 1st round, unprotected draft pick via the Brooklyn Nets.

“This has obviously been a roller coaster of a day for us, trading away Isaiah and Jae and Ante, especially Isaiah and Jae, who have been such a big part of our team and our success and our Celtic culture as leaders of our team. Very, very difficult day,” At the same time, a very exciting time [to add] one of the best offensive players in the league.” ~ Danny Ainge

What this means for Cleveland:

IT Injury– Isaiah is coming off a career year, after averaging 28 ppg, 5 apg as he led the Celtics to securing the first seed in the Eastern Conference. He is also coming off a hip injury that sidelined him in the Conference Finals against the Cavaliers. He opted not to have surgery and Celtics, GM did admit that the injury to Thomas’ hip did pay “some” role in him deciding to pull the trigger on the trade. Head coach Brad Stevens and Danny Ainge has both doubted the star’s readiness for the start of the season but Cleveland is said to not be as concerned in the short term about IT’s health

IT Contract– IT was the last pick in the 2011 NBA Draft, while Kyrie Irving was the first pick and the Rookie of the year. The two players recorded similar numbers last year, but have two significantly different contractual situations. Thomas is age 27, with one year left remaining on his current deal. He has made it quite clear that he will be expecting a max contract on his next deal, as he’s jokingly suggested that a team is going to “have to bring out the Brinks truck to retain his services.” The 5 foot 7 guard will be nearing age 30 and can be a high liability on defense. Cavs run the risk of losing IT in the off season for nothing or will be forced to pay him max money if he receives a max offer from another team in free agency 2018.

“I deserve it. I put the work in, and you can put me down against any guard in the NBA. My numbers are up there with the best players in the world, and my team is winning. So, I mean, you have to reward that.”~Isiaiah Thomas

Defense/Back Center and Depth– Jae Crowder is as solid as they come. He’s a 6 foot 7, defensive stopper that brings grit, attitude and heart to the Cavaliers. Crowder averaged 15 points and 6 boards for the Celtics last season, and routinely was assigned to cover the league’s best small forwards. He is on a bargain contract and his addition to go along with Jeff Green’s and Derrick Rose’s addition puts Cleveland in great, flexible shape on the perimeter. Antic Zizic was merely used in Boston but he has potential and upside. He should provide much needed depth for Cleveland at the five position.

2018 Unprotected Draft pick– It was an unknown draft pick, or Jaylen Brown or Jayson Tatum and Boston chose to part with the unknown. The pick comes via the Brooklyn Nets and is unprotected. Depending on where the Nets finish the draft pick position could potentially end up being a top 5 pick, in what is expected to be a strong draft.

Overall Thought– On its face Cleveland does not gain from this trade in the short term or in the long term. Kyrie Irving grew and developed into a bonafide star in Cleveland and now the team is trading the 25 year-old star before he enters his prime. Irving seemingly has not even scratched the surface yet as to being the player who he has potential to become and in my humble opinion the Cavaliers just parted with LeBron’s Robin for no other reason but the fact that Robin requested that they do so. Kyrie Irving had 2 years and a player option remaining on his deal, so this trade seems premature and hasty. Mamba 2.0 was traded before clarity for the team’s future was actually realized. It is unclear if Cleveland will take a step backwards in the short term with this move but what the moves means for the future looks shaky. The Cavs will now be experimenting with new personnel in LeBron’s contract year. Now that the team have dealt pre-prime Kyrie, they run the high risk of losing LeBron, IT, and Derrick Rose in the off season and now will have no Kyrie to build around. If that happens they will be left with Jae Crowder, Kevin Love, a draft pick and a lot of memories. In the words of Jay-z, “shh was all good just a week ago.”

All of these mysteries could have been avoided if Cleveland just stayed pat and let this year play out with Kyrie still on the team. The Cavs could have gained a better outlook of the future in July 2018, once LeBron decides to leave or stay long term. If he chooses to stay, they could have got a deal like this one or moved Kyrie for something else, instead of losing him for nothing the following off season. If LeBron walked, Cleveland could have made a compelling argument to give Kyrie what he desired by building around him with Kevin Love and others. They Cavs also had leverage by owning his “Bird Rights” and being the only team that could pay him “Super Max” money. If that was not to his liking, well they then could have still traded him for something in return, with a year remaining on his deal.

Losing Kyrie surely will change the identity and chemistry of the team as he was the team’s leading shot taker in the playoffs. Kyrie is a top 5 point guard, while IT is a star as well but does not posses the same ceiling as Irving.

Being that Cleveland chose to dish him now, rather it be for locker room and distraction issues or not, the move comes with great risk and unknowns. Who knows what the draft pick will pan out to be? We all know who Kyrie is. Who knows how IT will pair with LeBron? The Cavs just virtually turned into the Boston Celtics with LeBron James overnight. If LeBron leaves, Cleveland runs risk of not even being Boston but being back to the 2011 Cavaliers with no bright spot in Irving in uniform. Instead, he will be across town building a force in the east. Sounds pretty weird doesn’t it? I bet it will look weird too.