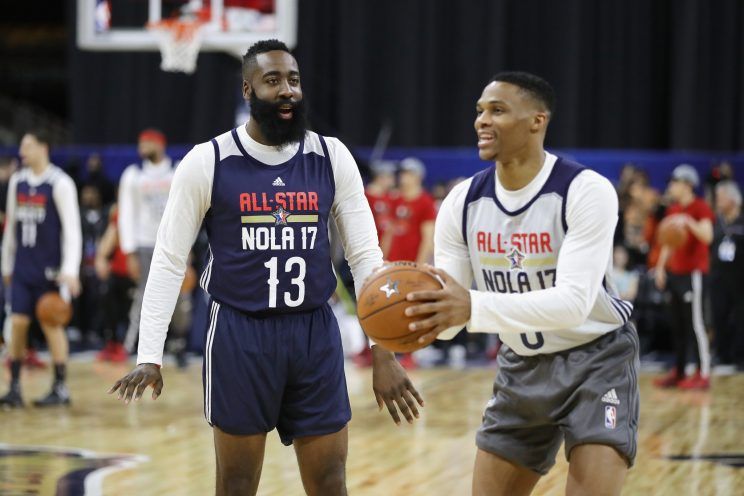 Russell Westbrook in the 2016-2017 NBA MVP. Those words sound great to Westbrook especially when you factor in the critics saying that he wasn’t fit to shoot the last shot of the game when Durant was his teammate and he was shooting too much.

Now the same critics and media who said that he was not a player that can to take a team to the next level has voted him MVP of the entire NBA. That has to feel good above everything, as he made sure to highlight in his acceptance speech.

In his very touching and emotional speech he made sure to thank the media for voting for him and admitted that he never thought he would ever be thanking the media for anything.

In terms of his ongoing feud with Durant this helps him keep up to Durant’s pace a bit, as the two can now call themselves MVP’s. Durant won the NBA championship and was the finals MVP which means he was the main reason the Golden State Warriors were able to obtain the championship they thought was there’s last year. Now that the Warriors are looking to become the next dynasty after winning two championships in three years. Russ now has a fellow all star to run with him in OKC, with the arrival of Paul George who game via trade with the Indiana Pacers.

Westbrook’s Oklahoma City Thunder team will look to be more competitive after trading for George shortly following this year’s draft. George may not be Kevin Durant but he’s definitely a star in his own right and an upgrade to a limited Oklahoma roster from a season ago. Though PG13 only has one year remaining on his deal, the Thunder are hoping to do enough winning that will entice him to sign on to extend his time with Westbrook.

The Thunder did not beat the Warriors at all last season during the regular season and that’s why Westbrook’s MVP award had to be looked at by him as the greatest revenge. He was able to get the last laugh when the season finally concluded with the MVP award. Durant was able to win the games head to head and ultimately earn his first NBA title but Westbrook was recognized as the league’s most valuable player for his historic season.

Russ averaged a triple double this past season which is the second time that is has ever happened before. He finished in first place in MVP voting with, 135 points over James Harden who had 753 total points. Westbrook had 888 total points.

Westbrook led the league and his team in scoring with 31.6 points a game. He finished 3rd in the league in assists at 10 per game, and at number 11 he is the only guard to be ranked in the top 20 in rebounds. He led the league in points per 100 possessions in the clutch with 74.3 while shooting 44.3 from the field. “Clutch time” is when there is five minutes left in the game and it is a five point game.

He had the most points when finishing with a triple double game with 57 points against Orlando on March 29th 2017 which was also an away game.

The Thunder won 47 games this season and Westbrook had 42 triple- doubles which is the most ever in NBA history. In games where Westbrook had a triple-double the Thunder were 33-9 so that means if it weren’t for Westbrook’s efforts making the playoffs would not have been secured.

If you looked at the Thunder’s roster before the season started many would have figured that they would not make the playoffs in a Durant departure but not only did they make the postseason in a tough Western Conference but they finished as a 6th seed.

Westbrook led the team in assists, rebounds and points and the team did not have another player average more than 20 points a game for the entire season. The Thunder was dead last in three-point shooting but were still ranked tenth in points per game, largely due to the production of their star guard. Westbrook finished the year leading the NBA in usage rate however he still managed to shoot 42.5 percent from the field while shooting 84.5 percent from the free throw line.

I think Westbrook’s season was magical and the thing about it is how he carried himself. You didn’t see him pressing to much for certain stats. You saw him play within the rules and play with heart and determination. Westbrook’s drive and will is one that nobody can question and I think that he took the criticism from the media personal about how he played with Durant. He wanted to go out there and prove that he was in fact a superstar which Mark Cuban said he wasn’t. He wanted to prove that he could put a team on his back and with this MVP he has done just that.