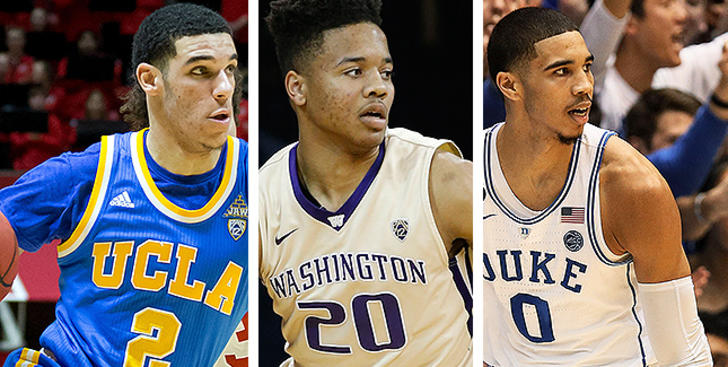 Today is the NBA Draft and there are a lot of rumors going around. The night should be interesting, as this year’s draft is quite deep. Below is TheBlackJuice estimations of the night’s draft order for the entire first round.

Fultz is the best player for the Sixers to pick. He has the potential to be big time with his scoring ability and the Sixers are clearly high on him, as they traded their 3rd pick to the Boston Celtics to pick first. He is perfect to add to their other young pieces, namely Ben Simmons, Joel Embiid and rookie of the year award nominee Dario Saric.

With Magic Johnson shipping out D’Angelo Russel to the Brooklyn Nets, the selection of Ball here is looking more and more promising. Ball would fit in LA because he would be a better floor general than Jordan Clarkson and the hype that surrounds him would be a boost of excitement that has been absent from the LA Lakers for the past few years. Ball is amazing at seeing the floor and making clutch plays, as seen in his lone year at UCLA. The Lakers are high on Lonzo and his dad’s list and the feelings seems to be mutual with Laker personnel.

Jackson is a player that has the potential to be an All Star and he is going to a situation where he can develop and help a team win a championship. He won’t be called to be the number one option immediately so he will be able to settle in and be on a team that is winning games. Look for him to break out in two or three seasons.

Tatum is a smart player that is ready to play now. The Suns have a 70-point scorer on their team already in Devin Booker that is developing every year. Having Tatum, a smart forward, next to him will help the development of the team.

With Demarcus Cousins gone and Rudy Gay’s future up in the air, Jonathan Isaac is a good pick for the kings here. He is a long, versatile player that can play both forward positions. He also blocks shots and crashing the glass very good. If he improves his jump shot, the all star game may be in his future.

Fox is a player that is probably the fastest in the draft and he has experience in playing in big games while at Kentucky. He dropped 39 points on Lonzo Ball and has the game to back up his heavy declarations. Kentucky has pumped out All Star after All star with players like Demarcus Cousins, Anthony Davis, and John Wall and Fox could be that next star from the #BBN.

The Timberwolves have been looking for a stretch-4 and they can find a young one in the draft. Markkanen is a player that can be able to come in and hit shots and provide quality offense. He is a seven footer also so that will help him get good shots in the NBA against other power forwards.

The Knicks are most likely dealing Carmelo Anthony this offseason, so the team needs to rebuild. Getting a point guard to set up the offense will most certainly help, as the team has been mum on rather or not they will return Derrick Rose. For a much cheaper price drafting Smith here makes perfect sense, as a pick in roll with Smith and Porzingis could be deadly.

The Mavericks are looking for a guard and they can get one in Donavan Mitchell. Mitchell has amazing scoring potential and he can help the Mavs get baskets. Nowitzki is getting ready for retirement and getting the right piece can help the team move on after that happens.

Collins can come in and be a rim protector for the Kings. With them already picking Lonzo Ball a good center to protect the rim will help them play good offense and defense.

Monk has the scoring potential to break open games and he can become a steal in the draft. The way Monk has showed he can score is a big reason why getting him at 11 will be a steal. Pairing him up with Kemba Walker in the back court could lead to a playoff birth again for the Hornets.

Luke Kennard is a sniper and the Detroit Pistons need a shooter on their team. With the ability to shoot the three that is what is going to get Kennard drafted so high. He also has the toughness and the hustle to do other valuable things on the court.

Anunoby can be the biggest steal of the draft. He is 6’8 with a 7’2 wingspan and at Indiana he shot 70 percent when he shot 2-pointers. Currently he has poor mechanics on his jumpshot but much like Kawhi Leonard if he is able to improve that, he will be a force to be reckoned with. If he can develop into a great two player like he has the potential to, people will look back and say that he was a steal at 13.

The Heat are looking to find a player that will be able to pair up with Hassan Whiteside and Giles could be that player. If it had not been for an injuried plauged history, Giles would probably be a top 5 player. He is a player that plays well with his back to the basket and he’s no slouch defensively. If he is every able to remain healthy, Giles may leave a lot of GM’s that passed him up with regret.

What are your guesses for this year’s draft? Tweet us @theblack_juice and let us know